Every second and fourth Thursday night of the month Fleet Street Kitchen hosts their Jazz Night from 6PM to 8PM in the Tavern Room.  It overlaps with their Happy Hour which runs from 5PM to 7PM so show up a little early and get yourself some good seats and cheap drinks.

I survived one of my busiest weeks at work and I was exhausted but this was the first chance our schedules worked out to make it for their Jazz Night.  Being the early birds that we are, we got there right as they opened at 5 and had our choice of seating in the Tavern Room.  Being the first patrons in the bar also means you get exclusive attention from the bartender.  I decided to start with the Change of Heart, which is a drink that changes every night depending on what the bartender has come up with.  Tonight he was making El Diablo, which has tequila, creme de cassis, and ginger beer.  Fleet Street Kitchen makes their own ginger beer, which is my favorite addition to alcoholic beverages, so I was sold and I was not disappointed.  El Diablo was delicious and it might be my new favorite drink so, of course, I had two.  My husband finally settled on Too Little Too Late, which has bourbon, grapefruit cordial, and amaro nonino in it.  He also was a big fan and that was his beverage of choice for the night.

Too Little Too Late & El Diablo

Since we had an hour to kill until the music began we decided to start out with some small plates from the Happy Hour and Appetizer menus.  We ordered the Charcuterie & Cheese, Crispy Baby Artichokes, and Crispy Chicken Thighs. 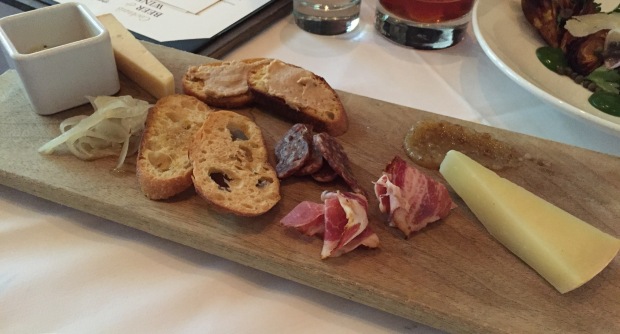 The chacuterie had two cheese offerings, one soft one hard, and a selection of three meats, one being a smoked pork pate on toast.  Their house made mustard was a perfect accompaniment to each food item and the pear jelly went well with both cheeses.  Not being a big fan of pate, I was impressed that I couldn’t get enough of it. 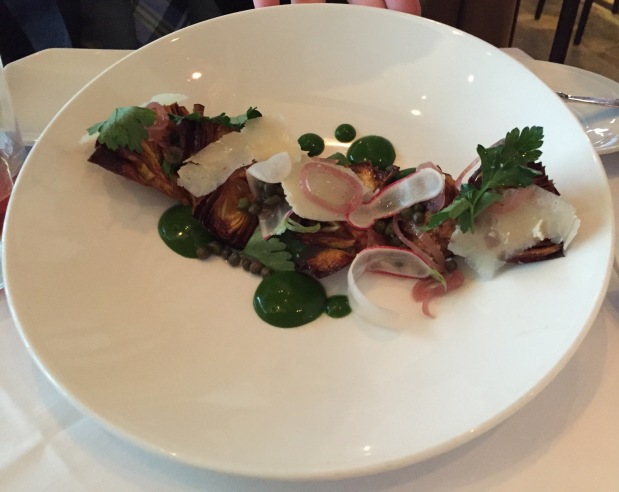 We took a chance on the Crispy Baby Artichokes because the way they were prepared reminded us of our favorite Brussels Sprouts.  They were perfectly crispy and sprinkled with parmesan, parsley, capers and pickled shallots.  The vibrant broccoli pistou made the dish look like a work of art and was perfect for dipping each artichoke in.

The Crispy Chicken Thighs were an afterthought, not quite ready to order dinner but hey, these are only $5.  I’m glad we didn’t pass them up.  The dish it tiny but it packs a punch and leaves an impression.  It’s not easy to keep the skin crispy after applying a glaze but they were successful, my chicken thigh was crispy to the last bite.  The thighs were tossed in a smoked honey-harissa glaze so the first taste is sweet followed by a little afterburn.

Finally, the main attraction had arrived.  Okay maybe the opening act because, for me, the food is always the main reason I come to Fleet Street Kitchen.  This night we got to listen to the musical offerings of the Todd Marcus Quartet.  They sounded great and despite being in what felt like a small space, the high ceilings of the restaurant provided the perfect acoustics.  Their music was a perfect backdrop to our delicious main courses to come. 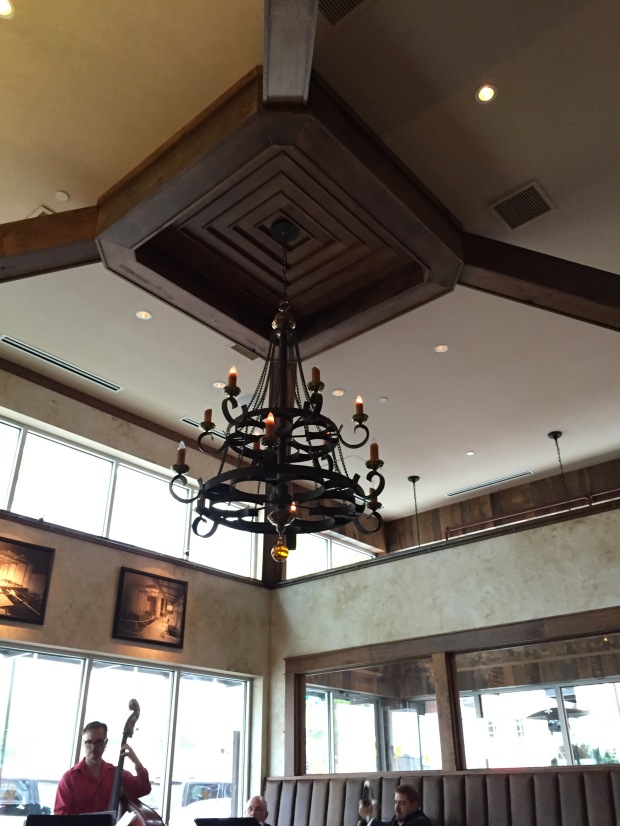 It was time to make our dinner selections.  Mr. Meat and Potatoes ordered the Seared N.Y. Strip, of course.  It came with a potato-horseradish terrine, miatake mushrooms, braised cipollini onion accented by a spinach puree and beef jus.  50% of the time when he orders a medium steak he gets what he asked for and tonight was one of those nights.  The steak was cooked to a perfect medium.  The terrine was a tiny work of art and not too heavy on the horseradish. 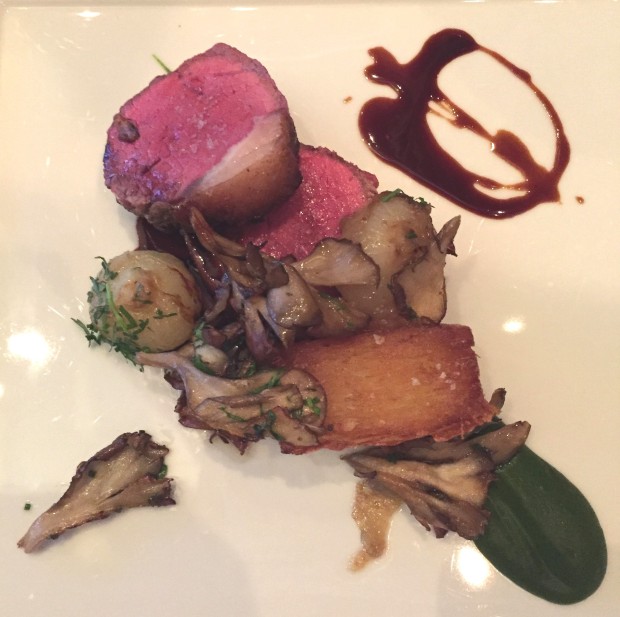 I decided on the Casarecce Pasta because it had morel mushrooms.  I grew up in the Illinois where hunting morel mushrooms is basically a sport and I excelled at it.  How many people can say they spotted a morel mushroom growing on the side of the road while in a moving vehicle?  Not many, but I can.  I have yet to find a good spot for morel mushroom hunting here in Maryland so for now I have to settle with ordering it at restaurants.  This dish was not settling though, it was delicious and the highlight of my night.  The pasta was dressed with morel mushrooms, fiddlehead fern, english peas, ramps, and a parmesan gremolata.  Fiddlehead ferns are something new for me and this was only my second time having them.  I love the extra crunch they add to this dish.  It’s hard to create a pasta dish with such diverse textures so I was impressed.  There is nothing worse than the same bite over and over again but with this dish, each bite was different.  I’m glad to have ordered it.

The night was full of delicious bites and a theme of vibrant greens in almost every dish.  Spring has arrived in Baltimore and the dishes at Fleet Street Kitchen reflect that.  That also means these offerings won’t last long so get there while you can to enjoy the flavors of the season.

This site uses Akismet to reduce spam. Learn how your comment data is processed.

Went to @visitphilly for @officialpax_ and we treated ourselves to a fabulous Omakase dinner at @philly_sakana! So many delicious bites and the service was amazing. I’m already planning our next visit.
When the friends all get together @undergroundpizzamd is a must! All the favorites Pickle Bacon Ranch, Woodland, and Trifecta! Plus some mozzarella sticks!
I promise we had actual vegetables yesterday but today only the potatoes matter.
It’s that wonderful time of year and the best way to kick things off is with a visit to @bmorechristmas! So many fun vendors, rides, and delicious foods and beverages to enjoy. It’s the best activity to get yourself in the Christmas spirit!
Just a few photos from our visit to @bmorechristmas! We had so much fun! I’ll be back for more Raclette for sure!
The Tantan Tori from @slurpinramen was perfect on a cold and windy night! I enjoyed the spice level, warmed me from the inside out!
Delicious photo dump of all the @marleyspoon meals I’ve made the last few weeks. Their Broccoli-Cheddar Soup is an all time favorite in this household and we always enjoy the different grain bowls.
Long time burger night fan, first time brunches at @chuckstradingpost. I very much enjoyed my Val’s Rancheros Skillet and @bmore_charming went right to lunch with his delicious Chuck-a-Cheesesteak. They also have a pretty extensive cocktail menu. The Rose Tinted Glasses and Empress 75 were both very tasty! We’ll be back for more soon!
Some days only pizza will do. I love @jbgbsremington’s pizza and most days I’m totally satisfied by a basic cheese pizza but this last time we also had to order the Squash and Kale Pizza. It was super delicious and we enjoyed the leftovers for several days.
Had a fabulous dinner at @magdalenabaltimore the other day. We started out with some delicious cocktails and oysters. Then we shared the Duck for Two, which was super fun and yummy. We finished with dessert I love a good Affogato. Can’t wait to go back again soon.

Made with ♥ in Baltimore